For me, the fun thing about brecciated or conglomerate rocks is the way they tend to tell stories. The image at the top looks like a landslide with the larger, heavier pieces crushing the smaller ones as it rolls forward. Or maybe it's wood (although it's not) logs resting on smaller material.
While I'e found that the terms "brecciated rocks" and "conglomerates" are often used interchangeably in the field  to cover rocks that are formed by bits of rock being held together by a matrix, I discovered that the two names are kissing-cousins in the rock world.

Technically, breccia is a sedimentary rock that is made up of broken  sharp clasts (bits) that weathered off the main rock. They can be found at the bottom of the formation or have moved in a debris flow. These clasts are bound together in a  that may or may not be the same material as it is compacted to form this new rock.
Some minerals, like sandstone.granite can form breccia completely of their own material when the larger bits are compacted in with mineral grains. Breccia formed with multiple types of  are clasts referred to as polymict breccia.
This cool looking brecciated combo rock is definitely not jasper or agate. The bits caught in the black material are also the pink and apparently broke off it before being contained in the black.about 5.5 on Mohs scale for both colors.
Obviously, these pictures are not to scale, but you can see that this brecciated rock made a lovely cab. 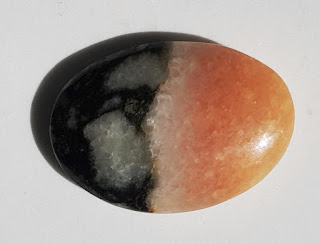 When the bits that weathered off the primary rock have gone a distance and have had their sharp edges rounded by water or the action of a debris field, you have a conglomerate.Some beautiful ones occur when the clasts are held together in a matrix of quartz or calcite. Of course, most of us see an example of a man-made conglomerate every day--concrete. 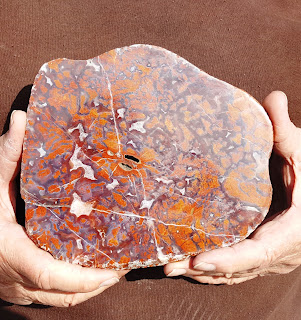 This cross slice from a large conglomerate jasper/agate rock has smoother edges and a bit of white agate that brightens the look. I know some people make clocks out of slabs like these and this one would be a natural since it already has a natural void in the center! 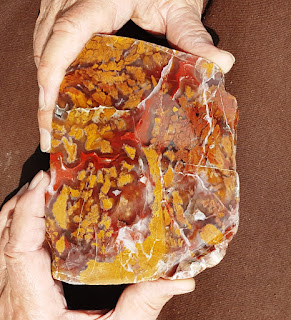 This one has wonderful colors and the brecciated bits are softly rounded and could be mistaken in some areas as a moss. It's primarily jasper with white and clear agate matrix.You know it's near my dinner time, because I'm seeing a red and yellow pepper salsa over a sour cream-filled burrito..

I fell in love with this brown and clear conglomerate jasper/agate because I can see all the way through it at some points because the agate is so clear. 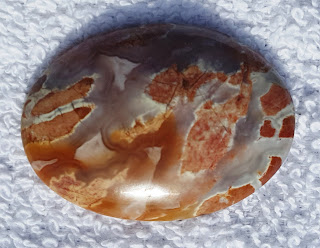 If you're enjoying my blog, please pass it on to your friends!
Want to write and tell me something?  I'm eager to hear from you!

Until next time,
Donna
Your Lapidary Whisperer
Posted by Donna at 1:00 AM