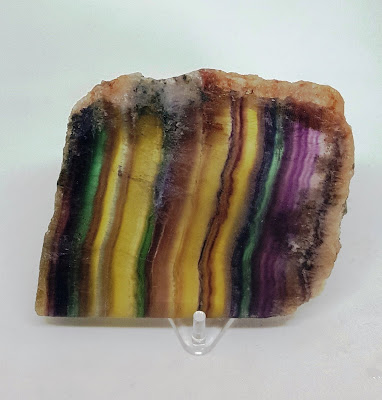 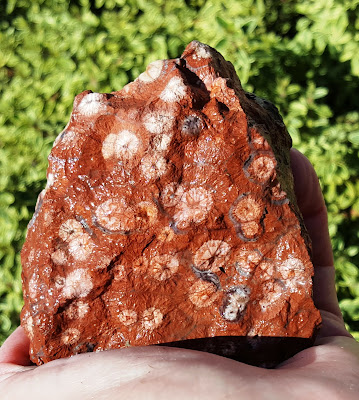 When I found this nifty rock at the Arizona show in February, I immediately realized it was something I've seen before, and it was called Birdseye  Rhyolite because of the distinctive orbs it contains. Then I went to look it up on mindat.org and discovered they don't recognize Birdseye Rhyolite. The only "Birdseye" designations they recognize are for a a shale and a quartz that I'd have called "Crazylace" (See Mindat.org image).

FUN FACTOID
According to Wikipedia, the name rhyolite was introduced into geology in 1860 by the German traveler and geologist Ferdinand von Richthofen . He named it using the Greek word rhýax ("a stream of lava") and the rock name suffix "-lite".

This Baron von Richthofen is better remembered in different circles as the grandfather of Baron Von Richthofen, the WWI aviator famous for is daring flying skills and remembered fondly by fans of the rock and roll band The Royal Guardsmen who loved this song. Listen here.

Because of it's rough, coarse texture, I thought it  might be sedimentary. (Dear readers, I've never studied geology and have an enthusiastic amateur's growing base of knowledge in the area--still needs to grow a whole lot). Okay, again, I thought it looked like sedimentary, but then I started doing some research.

Rhyolite is actually an igneous rock, like Obsidian!  Huge surprise there!  It turns out that if  the lava cools too quickly to grow crystals, it is Obsidian, a natural glass. When the lava cools more slowly it forms crystals that result in rhyolite, pumice, or tuffa. It can also result in textures including layering, spheres and nodules. 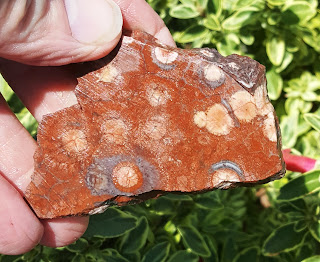 As sometimes happens, but is never welcome, this stuff seemed to almost melt in the saw. Before I was done with a few slabs, the oil was the dark orange color and had thickened up quite a bit.

This is the first slab I decided to cab. As you can see, it has some nice light pink orbs towards the right edge along with an iffy dark section above them.

I roughed out an oval. This is the "B" side.  Notice the grey streaks through the material. More about them later. 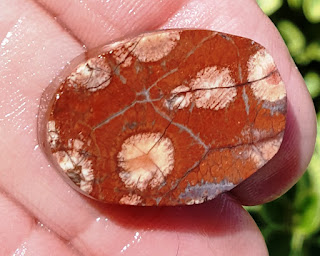 Then I turned it over to the side I'd originally planned to use and the pink 'eyes' are even more dramatic when they're a bigger part of the picture. I was concerned about the grey material at the top seemed a bit friable. However, it didn't go all the way through the depth of the slab so I decided  to deal with the uneven gray material by cabbing that as the top surface. Those big "eyes" had it! 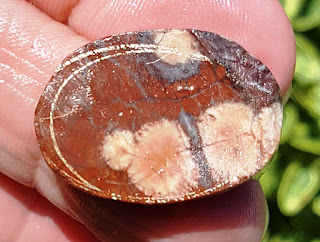 As I mentioned earlier, this stuff made a thick mess of my oil and did the same to the water when I was grinding it.  The gray stuff ground to a nice polishable surface and I wondered what it was. When I discussed this with another member of one of my rock clubs, he suggested it might be Hematite or Magnitite.  So I got out my handy tester--a paperclip hanging from a thin sewing thread--and proceeded to hold it over the rock. Bingo!  The paperclip started dancing and my dark lines and upper edge were definitely Magnetite.

Now, Rhyolite is a  6-7  on the Mohs Scale and Magnetite is more than 5.5, so they seem pretty well matched in terms of grinding and polishing. In this particular rock, the Magnetite was actually a bit harder, making it more difficult to keep from getting sinking areas between the lines.  Difficult, but not impossible. 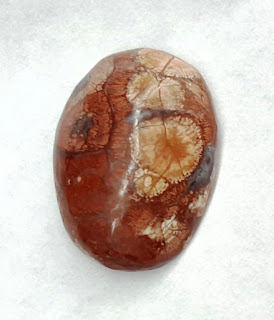 I'm pretty happy with the final cabochon. It's not as shiny as I like, but then the material wasn't all that hard. If you look carefully at the center blossom, you can see a bit of magnetite at the 11 and 3-5 hour marks around it as well as some faint lines.

Next time I play with it, I'm thinking about using some Opticon on a slab and seeing if that makes it enough harder to take a better shine. Think it will work?

Hope you enjoyed my blog! Until next time, I'm your Lapidary Whisperer,