IT'S ALL HAPPENING AT THE ZOO!

A while back, I did a blog on zoo-themed rocks and it was a lot of fun to work them.  Since then I've been keeping an eye out for other rocks that fall into that category and I found two that belong in the Big Cat house at the zoo.

The Leopardskin Jasper above has wonderful lines and shapes.When I compared it to a picture of a real leopard skin, you can see how the blotches tend to run in lines like on the rock.

I especially love the orange/black combination in this rock. As you know, I love to find crystal-lined vugs in my rocks because they're so much fun to work into the designs and this specimen didn't disappoint!  The (much enlarged) picture of a cab of the Cheetah Jasper that was sliced off this specimen was hiding this little crystal-filled vug. The specimen shows a different crosscut with a vug that I haven't quite decided what to do with yet. On the other hand, if you look at the specimen just right, it could be a bear head on its back with the mouth open . . .

When I first worked with the animal-themed rocks,  I was looking through some slabs, and the Simon and Garfunkel lyrics, "It's all happening at the zoo," came to mind. On the table, I had slabs of zebra jasper and some beautiful tiger eye.

So I wondered, are there many other stones that could be zoo animals?  Yup! Here's the line-up of the ones I found in my shop on the first try.

The zebra is something I found at an estate sale in San Francisco. The shop equipment and contents were being sold after an old rockhound went to that lapidary shop in the sky.  I was pretty new at the hobby then, and I was entranced by the stark black vs. white coloring and the fluid lines of the rock. I took a few pounds then, now I wish I'd bought all there was.

This cab is from a smallish strip I purchased at a rock show. The first thing that struck my eye about it was how the brown intrusion on the large end drains like a lake through the most chatoyant part of the stone down to a blue tiger eye space. To me, it's a story stone, because of the way the color and the movement work together. For example, if it's not a lake draining to the bottom, what if it were a blue volcano with the brown smoke going through a bright sunset?  I believe this tiger eye originated in Western Australia where it is called Marra Mamba.

One thing I love about working tiger eye, is that with a Mohs scale hardness of 5.5-6, it is soft enough to work fairly quickly, but still hard enough to take a wonderful shine!

Okay, let's start with the fact that I have no idea why it's called snakeskin when it's red. I'm not sure I've ever seen a red snake.

The parallel red lines do remind me of a snake and I can almost see it slithering along, but really . . . Maybe it's a special zoo snake.

Okay, it really looks like one of those bugs you find under rocks.


As jasper goes, crocodile is reminiscent of the animal, but it's a long way from being the most attractive stone out there. It does give the overall impression of a crocodile skin, I haven't been able to get the cabs from the piece of rough I purchased to take much of a shine. I've been using cerium oxide on canvas. Has anyone out there had a better result with another polishing medium?


SHOULD BE AT THE ZOO

When you look at a piece of petoskey stone, don't you think of a tortoise shell? It really has that vibe, but I didn't see it called that anywhere. 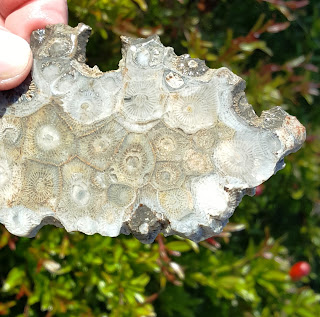 So, these are the zoo animals from my workshop rocks. Do you have any "zoo" named minerals you're working on or any minerals you think should have zoo names?  Send me a note with a picture, I'd love to see it!

Your Lapidary Whisperer,
Donna
Posted by Donna at 1:00 AM