ROCKIN' ON THE RIVER

Let's face it, any long drive is better if you can stop for a bit and find interesting rocks. Recently, my husband and I were on our way to a lovely winery-saturated weekend in Northern California.

Now, winemaking is his thing and rocks are mine. So we decided to make both of us happy! Because we had tremendous rains last winter, a lot of fresh material has washed down to the shallower areas--a great place to check out the rocks.

I'd gotten in touch with the Contra Costa Gem & Mineral Society field trip guy, Chuck who seems to know where all the good pickings are. He recommended a place along Saint Helena Creek in Middletown, CA and we scheduled a stop there. It was right behind the parking lot of Perry's Deli (which makes delicious sandwiches and don't miss the potato salad!) and over some large rocks placed to keep you from driving into the creek. 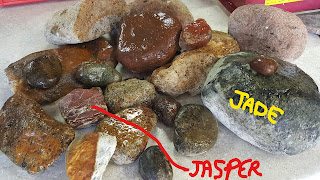 It was 100 degrees outside when we got there for lunch. I don't do heat well, but there was a nice breeze on the water--and I was motivated.

I spent about an hour checking out rocks along the edge and just inside the shallows. I found one nice small chunk of red jasper. I'd heard that others had found it there and I was hoping to find more, but no luck. I found a variety of rocks, including some that looked like they may have dendrites, which I LOVE to work with. There were a few smaller stones that wanted me to take them home and see about tumbling them, so I did. Finally, I picked up a large, dark, smooth stone. It had dried yellow algae on the outside. I don't often choose dark stones, but this one had some small turquoise-colored inclusions and a nice heft that made me think it might be hard enough to take a shine.

HOME, HOME ON THE SAW

When I got home, I took the picture of the rocks I'd collected, then started trying to discover what I'd found.

I hoped the chunk of red jasper (center left in the picture above) with white streaks would make a couple of eye-catching cabs, so I sliced it . . .  and discovered it was not as cohesive as I'd hoped. Okay, it wasn't cohesive at all; it shattered into pieces too small to use. Into the trash.

The pinkish piece (top right) was a bit light, but it was pink. So I sawed off the end and found I could easily break the end-cap with my hands. Not strong enough to work. Not pretty enough for a specimen. Into the trash.

I cut one rock that looked like it might have dendrites. It was both softer than I thought and muddy enough to make my cooling oil for my saw brown. Into the trash.

I worked a bit of each of the 'tumbling' rocks on the grinder. Mud. Into the trash. 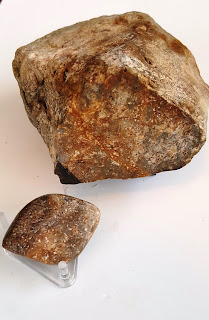 Then, I tried a rock that wasn't terribly exciting, but it wasn't mud. When I tried a corner on my grinder, it polished up a bit. It also had a nice combination of earth tones. Although it wasn't good enough for me to make as a cabochon, it works as a neutral background for wire wrapping.

I cut the next to the largest rock thinking it might be as interesting. Well, it was a conglomerate, but it had the colors and appearance of gray meat loaf that went bad last week. Into the trash.


Finally, I got to the biggest rock and yippee! It's hard, about 6 on the Mohs scale. It's still dark, but has those interesting turquoise colored bits. It polished like a dream. I was suspecting jade, and I wanted some back up opinion so I took a slice and a cab to my rock club meeting. We have a lot of experienced rockhounds and they pretty much unanimously declared it jade. I'm happy with that! Here's a picture of the side of a slice I ground where you can see the green inclusions. What do you think?

All in all, with the possible exception of the jade, I didn't find much useful, but I had a lot of fun rockhounding and checking the material I found out to see what it was. Would I do it again? Of course! I'd just try to do it  on a cooler day, so I could hunt longer.

What finds have you found at creeks and riverbeds?

Check back on August 2, for my next blog. Until then, I'm you're Lapidary Whisperer,


MOVING MOUNTAINS IN BOXES – SHIPPING YOUR MINERALS AND ROCKS


How a mineral is packaged is critical to maintaining its integrity, whether you are getting it for display or planning to commit lapidary on it.

When the Post Office found the package of Anthracite (yes, coal) I’d ordered, it was all by itself in a small bin. The seams and some of the fabric were gone along with about a third of my material.  The shipper had put it into one of those presumably indestructible USPS Tyvek envelope/bags.
Guess what? The Post Office is perfectly capable of destroying them and whatever they hold. To be fair, they could have been better packed. But still . . .

When it didn’t arrive in a timely manner, I checked with the vendor who confirmed it had been shipped and gave me a tracking number. After I tracked it to the local main post office, I went over. No problem, they knew the package, because it was sitting in plain view. But no one wanted to deliver the mess, and although they claimed they sent me multiple cards advising me of where I could get it, somehow the cards had proved too difficult to deliver also. So this is what I finally received.

HOME FROM THE SHOW/SALE

Even when I'm in control of the rock constantly on its journey to my shop, I need  to be sure your rock’s not rolling - and bouncing other rocks in my trunk or the back of my husband's Ford Transit Connect which has an enclosed cargo bay.

Wrapping the rock individually in newspaper, towels or lots of bubble wrap is a good start for larger pieces. I then secure them in a box or other protective object and stabilized in place so they don’t go flying around when I turn a corner.  For smaller rocks/slabs, wrapping them with newspaper around them and keeping them securely together in a bag is usually enough.  I normally bring an assortment of little plastic display bags to keep soft minerals from rubbing on and being scratched by other rocks.


SHIPPING CAN BE AN EXCELLENT OPTION

When tempting stones are heavy—too heavy to carry on an airplane going home or just too large for you to manage on your own, it’s time to ship them. Some shows have on-site shippers who will handle everything from wrapping your rocks to getting them to your front porch. Warning! This is not cheap. Not even a little. However, they have the materials and shipping capability to make sure your purchases arrive intact.

If you decide to take the DYI options, especially for fragile specimens, the people at Treasure Mountain Mining have created a very detailed description of how they ship minerals that have fragile crystals, etc. You can find it at: http://www.treasuremountainmining.com/index.php?route=pavblog/blog&id=36

Another DYI tip I picked up somewhere: if you really want to be sure your item isn’t smashed or damaged, especially if it is fragile, pack it securely like the directions above. Go out and purchase a new, light weight cooler like a Coleman or Igloo brand. Put the secure package in the cooler and pad it liberally so it won’t shift in transit and put the cooler back inside the box it came in. Then all you have to do is tape it closed, label and ship!
As for my damaged anthracite, I think if the Tyvek bag had been inside of a box, it would have come through fine. In case you’re wondering what I plan to do with coal, anthracite is a very hard and shiny coal. I like to do “lapidary meals” where all the foodstuffs are minerals.

The anthracite was crushed quite small and put in a Coca Cola glass with selenite ice cubes to be part of a hamburger meal I’m working on. When I send the anthracite donor a complementary glass of “Coke-a-Coala”, you can believe it will be packed so that not even a tiny bit of anthracite will move in shipment.
Drop me a note at Donna@LapidaryWhisperer.com and tell me about your challenges with shipping rough, slabs, finished cabs, and specimens!
Your Lapidary Whisperer
Donna Albrecht