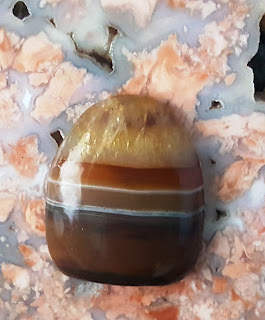 As you read this blog post on carnelian, you may think back to my recent post on garnets. I'm not focusing so much on brown/red/gold rocks as much as I am fascinated in the way they both handle light.

There is some variation within the scale. For example, the cab on the cotton candy slab just refused to take a real shine (it's photographed wet), yet the cab I made with some lower-value carnelian that is infused with what I've heard called "corn flakes", takes a great polish--except where the cornflakes surface.

While I'm continuing to explore better ways to get this particular piece of carnelian to take a nice polish, I love working with it because of the stripes and the quartz on top.  It appears that at one time the quartz on top  had shiny crystals. Weathering damaged them to the point that the top was mushy-looking. They were, however, tight enough that when I ground them down a bit they make an interesting top with flashes.


Carnelian is something I'd decided to do a post on, and kept putting aside. For starters, the only carnelian I had was not all that exciting, except for one piece with quartz crystals on top. I've probably looked at it a million times. I'd love to take the "V" on the right side and make it like a heart with a crystal top, but the quartz crystals on the right are more weathered and smooshed than the ones on the other side of the dip. Any of you readers have ideas for me? 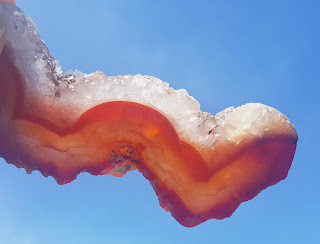 Then my husband and I took a weekend trip to Northern California and scheduled a stop at Chapman's Gem & Mineral Shop in Fortuna, CA. This place has so much rough, any lapidary artist would give their eye teeth to have it in their back yard. I'd give you a link, but they don't seem to have their own web site, everyone else is too eager to promote them.  In the yard, I came across a barrel that simply said, "Brazilian Agate". I was expecting the colorful, layered agate I've often seen at shows.

Nope, this huge space was full of carnelian. Now, carnelian and agate are chalcedony.When I first saw the sign, I expected the Brazilian agates that have layers of colors, but I was very happy to find this wonderful material.

It is believed that carnelian was originally named after the color of the kornel cherry. It comes in colors ranging from brownish red to orange and can vary from translucent to opaque. Like garnets, the specimens that are mined are often heat treated to bring out their best colors. Here in the U.S., carnelian is found in Oregon and New Jersey. Along with Brazil, where my latest rough was mined, it is found in Uruguay and India. 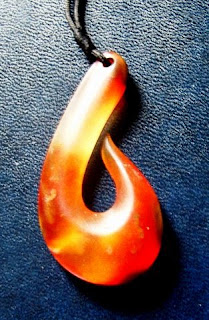 This carved Carnelian hook shows what a talented lapidary artist can do. It was fashioned by Stephan Roess artist, (stephan.roess@gmail.com).

This is a slab I cut from one of the pieces of rough I purchased at Chapman's. The fortifications where the agate bands suddenly change angle give it a lot of personality. I haven't worked it yet. It keeps smiling at me and as the Lapidary Whisperer, I listen to my stones and this one seems happy just the way it is!