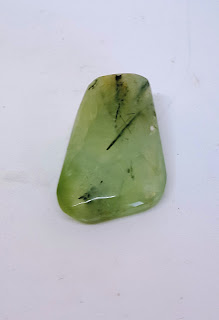 *Don't Miss My Big Announcement at the End of this Blog!*

It was a bright, sunny day in Quartzsite, AZ when I saw a tarp on the ground with creamy light green stones, and I was smitten. It came all the way to Arizona from South Africa, just for me. The vendor only had rough and a few cabs (I don't remember seeing any slices), so I didn't see below the exterior bumps like the ones in this picture of the outside.

PROBLEMS AS A CABBING MATERIAL

First, the prehnite felt fairly soft to me when I was working it. According to Mindat.org, it's 6-6.5 on the mohs scale. When I was working on it, that felt like it was softer, but it took steel to scratch it, so I guess Mindat's  right. It is usually seen in translucent colors ranging from clear to green or yellow, or gray. One deposit of orange prehnite was discovered in South Africa.

The structural material visible in the back lit picture of a cab, was somewhat harder than the areas without it.  Also the black tourmaline inclusions have a mohs rating of 7, providing even more variation in the hardness when I'm shaping and polishing the stone.It doesn't seem like much of a difference when you look at the numbers, but it was really noticeable when I was working it. So as I tried to polish my first cab, I kept using very fine grits on it and the soft material ground out faster than the structural stone and tourmaline, giving me a bunch of low points, which, of course, wouldn't make a smooth surface.

The next time I worked with this, I decided to go with a free-form shape and the prehnite cooperated a bit more (or maybe I was listening better). I also skipped my first wheel and went right to the 220 to start. I worked quickly and with a light touch. This time, I had a much better result as you can see in the picture at the top of this blog. Because of the nature of this material, I didn't really get a polish, but I finally did achieve a nice luster by not overworking the cab.

I'm glad I didn't get a lot of this material. I have one more smallish slab left, but I think it's going to spend some time in the box until it feels chatty.

Drop me a note and show me what you're up to in your lapidary shop!


ANNOUNCEMENT * DON'T MISS MY ARTICLE, "HARD ROCK MEALS" in the June edition of ROCK & GEM MAGAZINE! In it, I show how I created a case for shows that has a whole "meal" that's made completely out of rocks!!! 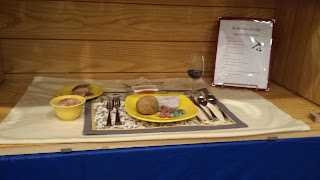 Come back on June 7, when I'm getting back inside rocks again. This time, it's not geodes, it's Thundereggs. Normally, they're not a favorite of mine, but wait until you see the cabs I've been able to make with what I've found inside!

Donna Albrecht
Lapidary Whisperer
Posted by Donna at 1:00 AM No comments: 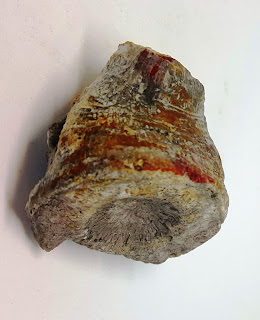 The resemblance between this coral and the horn of a cow is obvious, especially if the narrow end had extended on, getting smaller as it went. But the large end was the open growth area and the smaller end attached itself t the sea floor.

Scientifically it's known as rugose coral (Grewingkia canadensis)  Sadly for coral with such a beautiful color and fascinating growth pattern, it is extinct today.  It's heyday was during the Ordovician period 488 million years ago to Permian Period that ended 251 million years ago. 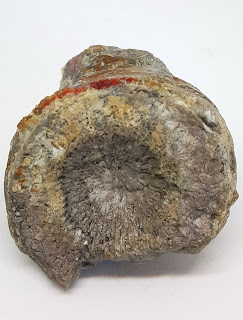 The coral animals formed these horns often in an individual structure, although they sometimes clustered structures as colonies.The animal lived at the large end of the calcium carbonate cone and grew on top of dead coral animals.Look for them in the midwest states if you're rockhounding.

The outside of horn coral is interesting, but the real fun is inside!  Traditionally, lapidarians slice it across the grain and polish it for display. The grey-brown material around the beautiful coral, is very soft. If you want to make a cab, plan to mount it in a bail that entirely encompasses the edge. I started it on my second wheel 220 grit and worked it gently. I found I could still make subtle changes up to 14,000 grit--it's that soft. Then I finished it off with a 50,000 grit to give it the best polish I could. 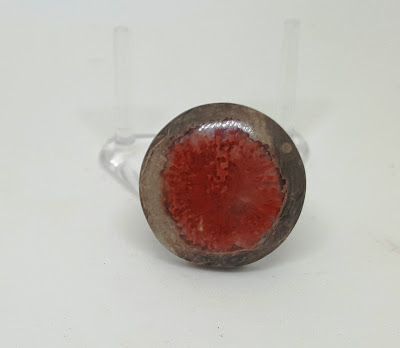 This cab wasn't nearly centered in the material, but it came out looking really nice. The white line is from the lights I used to help the colors show up. 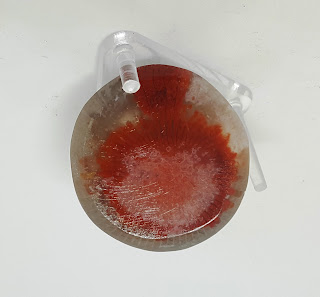 This second piece is more of a rough medallion than a cab, At this cut, there was a spray of coral that went all the way to the edge. I've never seen that before, so I thought I'd preserve it. This is the next slice after the one above.

When I'd worked with the other pieces I'd noticed that the markings out from the center of the slices reminded me a bit of dendrites so being curious by nature, I cut down a side to see if it had the speckled dendrite look that you get when you change the cut by 90 degrees. And it does!  Try expanding the image on your screen and you'll see it. 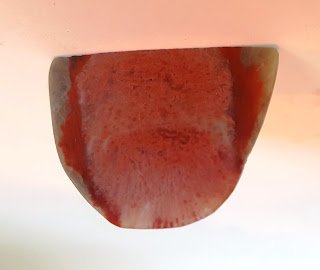 Thanks for visiting me here at Lapidary Whisperer. Next time I expect to be showing some Floy Wash Jasper--if it decides to cooperate. So far, not what I'd hoped it would become.

Visit www.LapidaryWhisperer.com on May 24 and see if it worked out. Please share this blog with your lapidary-inclined friends, or friends who just like rocks.