YOU CAN BRING MONTANA BEAUTY HOME! CHECK THIS OUT! 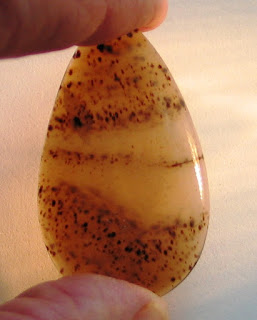 I love Montana Agate both for its distinctive style and at about 6.5-7 on the Mohs scale, it's a delight to work and polishes beautifully.

And even though it is very distinctive, there are enough variations in the inclusions to allow the lapidary to come up with countless wonderful stories contained in these stones. This one makes me think of a fast-moving stream going over a gravel bed. The creamy agate is separating the gravel except for one thin area that is fighting the water's power.

These beautiful stones are found in Montana, specifically the gravel areas between Billings and Sidney. They got there courtesy of the Yellowstone River which transported them from the Yellowstone Park area of Wyoming where they formed in volcanic during the Pleistocene Age which was about 12,000 to 1.8 million years ago.

I fell in love with these stones at first glance. I thought maybe there were tiny bits of petroleum trapped when the stone hardened. Sounds good, right?

After all, I'd often hear stories in Northern California that stones known as "Apache Tears" held petroleum. They sort of looked like they may have contained some because the color of the stones wasn't even, with some areas more clear and others dark. It was a great story, but it turns out that Apache Tears are obsidian, which often has variations in color. The Tears were a sort of naturally tumbled version.

So what was making those dots and lines that set Montana Agate apart?  It turns out that the inclusions are primarily made of iron and manganese oxides.The iron oxides give the inclusions a red color and the manganese oxides provide black dots and stripes. They are embedded in quartz that can range from clear to a creamy white.  Sometimes people refer to the inclusions as being mossy. They aren't, but seeing this slab makes it easy to see why some would describe it that way. 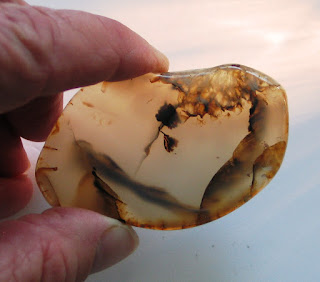 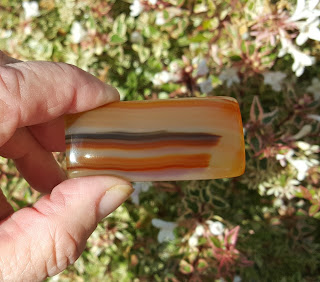 As I mentioned, the stone has a nice 6.5-7 harness, making it hard, but not so hard it takes forever to work.

The inclusions also make it fun to try to figure out how the stone wants to be seen.  This horizontal stripe piece looks a bit like a long flag to me. The iron and manganese oxide stripes are a bit fuzzy and I think the longish wavy lines add a bit of motion to the image.

One thing I really appreciate about Montana Agate is that I've never worked a piece that broke apart, period. Even the thin bands have never given me any trouble. If you're like me, you've had absolutely gorgeous stones you've been working on that suddenly split where there was a color change, but not here!

Agate often provides some surprises and Montana Agate is no different.  On one slab, I found a druzy-lined vug that was centered between two dark spots. Since I've rarely met a vug I could resist, I decided to create a teardrop shape that emphasized the shape of the vug and allowed me to get a bit of both dark spots on the cabochon. 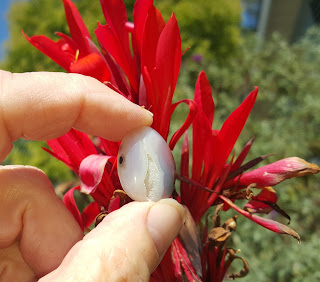 This little cutie was surprisingly difficult to photograph. It faded away to spots on a white background, look blue with another, and dark brown with yet another. The creamy off-white color of the agate was picking up colors from everywhere.  I finally took it outside and held it in front of a red flower, and it bloomed! You can see it picks up a bit of the red, yet most of the pure white remained pure white. I love this picture and I'll probably try this technique again.

Do you photograph your mineral specimens and cabochons? I'd love to hear how you do it. What are your secrets for a great shot?  Maybe I can include them in a future blog.

GETTING SOME FOR YOURSELF

Right now, this mineral is relatively easy to come by, either as a slab or as a finished cabochon.  I've always seen some in the rock shows along the West Coast I've made it to, and you can find it for sale online at eBay and other vendors. If you've never had a chance to work it, do get a slab and have some fun. You'll be glad you did! 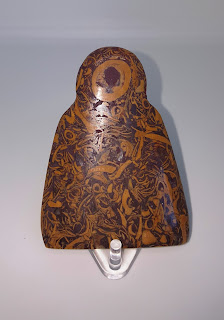 This stone with its hidden face made me think of a burqa, a garment worn in public by some Islamic women for religious modesty.

The fact that she is hidden makes me wonder about the woman inside. Is she young or old? Thin or heavy? Is she smiling behind the light fabric covering her face? I think the pattern of brown-on-brown swirls add a bit of mystery to her.

As you can see, up around her face there are tiny voids in the st one. I've often found this material to be a bit on the soft side, and here, the inclusions of the swirls which are firmer than the matrix have caused these tiny voids during the grinding and polishing phases. I don't have a name for this jasper. I suspect that it evolved in a marine environment since the mish-mash of curves could be evidence of shells in mud. 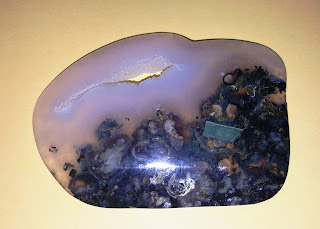 I purchased this as part of a larger slab. There were several things that caught my eye and I saw an 'under the sea' theme right away--in an environmental way.

The darkened area consists of countless bits and having seen images of the amount of trash that has found its way to the bottom of the sea, it struck a chord with me. The rest of the slab is translucent to clear. The color it has is from a yellowish piece of paper I put behind it for the photo to highlight the druzy in the pocket of the wave going over the material.  It tells a story and is beautiful to look at. What more could I want? 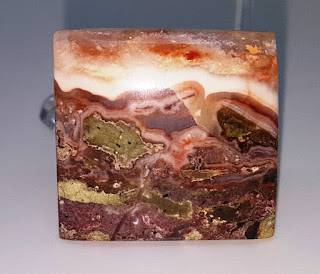 When I look at this cab I made, I think of myself sitting in an airplane and looking out the window.

Down below, I see clouds with a break in them that allows me to see the countryside with patches of greenery (farms? forests?) along with some darker areas that may be housing. In the center, there's a smooth blue-gray area that I see as a lake although in reality it's a translucent quartz. This whole mini-world takes place a one inch square cab. Amazing!

IT WAS A DARK AND STORMY NIGHT 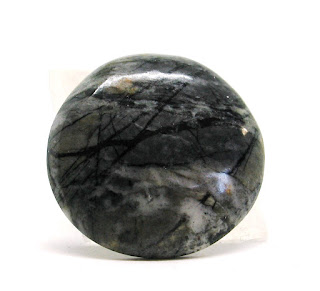 Picasso marble is loaded with stories!  This cab is on the darker side of the Picasso I've worked. However, when I put the stencil over it, it was obviously a bad storm, like the ones you see on tv and in movies just before the ship sinks. I like to think the dark lines across the cabochon are the  mast of a venerable sailing ship and the white on the bottom is waves with the white on the top showing the reflection from the lights when I took the photo. 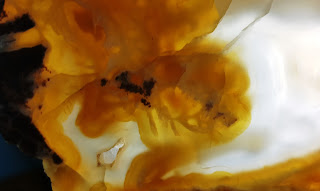 Some of the greatest story stones of all are fossils. They are a window into life thousands and thousands of years ago. When I purchased the slab that has this neat bug in it, I was planning to cab it, but then I took a second look in better light. He's about 1.5 inches long.

If you're having problems seeing him, the dark debris is where a collar would be and his legs are hanging down in the center of the image. I could probably cab him, but I'm afraid I'd lose parts of him in the process. Even non-lapidary people get excited when they see him!

That's all of the Story Stones for this time. I hope you enjoyed them.

Did you see the Zoo animal rocks last time? I wasn't able to get notices out on social media. Take a look at it while you're here!

Drop me a note and let me know what you saw in them.  I'll be back in two weeks with another blog.