VUGS - THE HOLE IN YOUR ROCK

While all geodes contain vugs, not all vugs are geodes.

I've discovered that there can be a lot of confusion about the differences between geodes and vugs. According to Mindat.org, a vug is a cavity in a rock, usually lined with crystals of a different material composition than the enclosing rock.

Geodes, on the other hand, can form in any cavity, but the term is usually reserved for more or less rounded formations in igneous and sedimentary rocks, while the more general term “vug” is applied to cavities in fissures and veins. 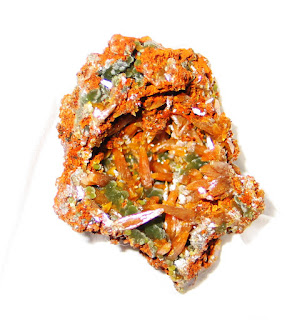 This is my very favorite vug.  It's only about two inches at it's longest point and the cavity is a bit over one inch deep,but it's full of character. When I hold it in hand, it mostly looks brown, but you get it near lights and it turns into a star. I think the green is olivine and the orange spears are wolfenite.

HOW DO YOU IDENTIFY A VUG?

According to Mindat.org, a vug is a cavity in a rock, usually lined with crystals of a different mineral composition than the enclosing rock.This fanciful vug is lined with crystals that appear to be quartz.  But as someone who is always trying to listen to the rocks,all I see is an angry swirl with some crystal linings. Not a happy vug at all. 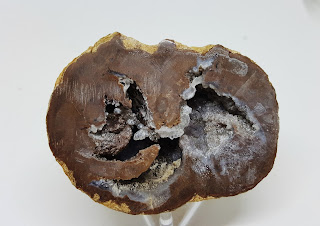 YET DISTINCT FROM A GEODE

An open space in a rock is not necessarily a geode.  To be a geode, the open space in the matrix must have a shell-like outer layer with crystal growth geodes: 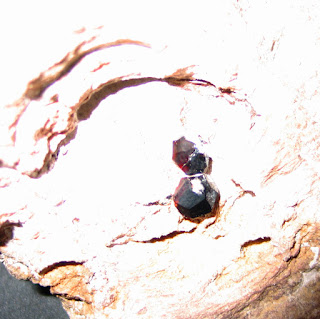 Sometimes vugs aren't crystal-lined, but do contain crystals. Here you can see two red-brown garnet crystals and the outer edges of the original vug where they were formed.  The garnets are a beautiful color, but both have flaws in their formation. They do make a wonderful display piece though!

The shot below shows another face of the same rock with empty vugs shown. When I cut this, I REALLY hoped I'd find some more garnets, but sometimes a hole is only a hole. 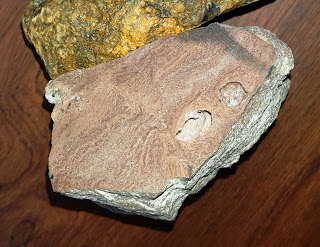 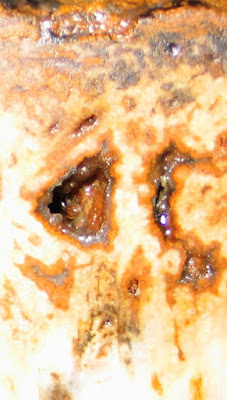 I was ready to call the openings in this rock vugs. When I sliced the rock, the spaces were full of loose dirt and were frankly, ugly. After I cleaned it up, photographed it, and enlarged it, I could see that there actually is a lining on the holes in the rocks. However, that crystal lining doesn't make it a geode because there's no encompassing outer layer, so a vug it is.

The thing that makes this picture interesting to me is that the vugs are shown here at several levels of development from the dark spaces that are somewhat friable to finished crystal-lined shapes. 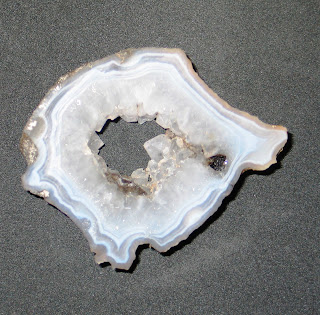 And, here's a slice of a real geode.Notice the strong perimeter  banding that makes it obvious that it is separate from the surrounding material.

In this case the geode slice shows inclusions at the 4 o'clock and 6 o'clock positions.

If you are a subscriber to Rock & Gem Magazine, don't miss my article in the January issue about Intarsia/Pietra Dura. It profiles the craft and the history of this artistic craft through the vision and accomplishments of renowned artist Naomi Morgan.

Thank you for visiting LapidaryWhisperer.com  I hope you enjoy my posts.I'd love to hear from you.

I wish all my readers the joy and blessings of the holiday season, however you celebrate it.

A rock that insists on telling you a story is a great rock to get to know!

Sagenite loves to tell stories. At least the kind I work with in my lapidary shop does. There are apparently two schools of thought when this name is used to describe a rock. There's the one that describes stones with vibrant, puffy strands that appear to be moving with an unseen tide. I absolutely love these. The other is a variety of rutile  where the crystals criss-cross  in a geometric sort of pattern. The look is so distinctive that back in 1796, it was named sagenite  from the Greek and Latin word "sagena" or net.

This is a link to a picture of the criss-cross pattern. https://goo.gl/images/m2aBpA

As a professional writer, I'm leery of copying someone's image for my use, like this blog, without permissions. This image appears on a site that says the images are royalty free, but then has a notice to check for copyright. I decided a link was the best way to go. 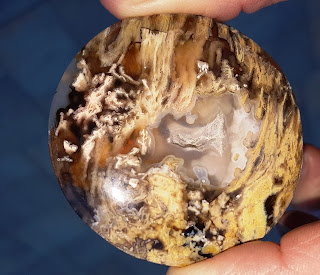 I fell in love with the slab I used to create this cabochon!  It has the yellowish sagenite, along with white tube structures you can just see inside the clear agate, and a vug that comes across as a whirlpool that is causing the sagenite to swirl around.

Pat McMahan, renowned agate expert, wrote that these sagenetic filaments are often arranged in fans or sunbursts in the agates and can come in different colors. That is because the sagenite in agates is a pseudomorph (where one mineral replaces a different one that has already created the shape). As an interesting aside, he feels that the sagenetic structures form in the still-hardening agate and they don't extend into nearby banded agate which is formed at a different time. 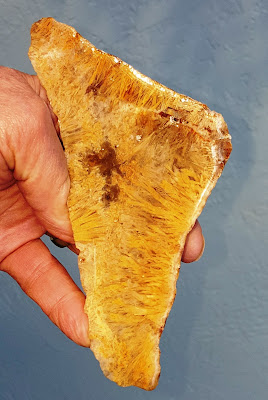 This cool piece of sagentic agate really shows off the way the filaments can arrange themselves in groups of fans. 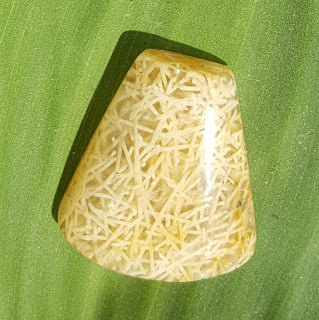 The vendor who sold me this had a lot of slabs of this material. I asked him what it was and he wrote "sagenite" on the slab I purchased.

I've had other people who have seen it agree that it is sagenite, but it's different from my other pieces because there's no cluster that the formations spring from.

ROCK SHOW SEASON IS ON!

If you have a favorite club-based rock show, drop me a note and tell me why it's wonderful and maybe I can use it in a future blog!