When I think of rocks for my lapidary projects, I tend to think of minerals in their natural state. When I think of lab-created mineral products, I think of gemstones like sapphire or diamond. But there is actually a third category that falls roughly between the two. The truly unnatural cab materials.

The way I see it, Ray Bridewell's home-grown crystals are at the top of the heap. They are bright and gemmy and take an amazing polish 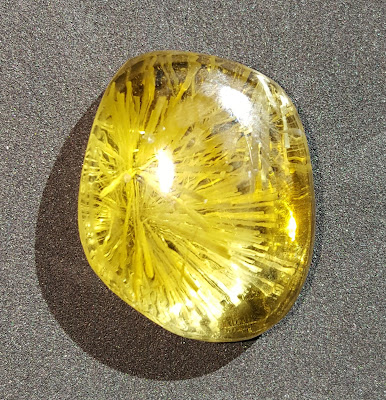 I made this incredible free-form cabochon using material I purchased from Ray. He makes it by melting quartz and other materials to 2300 degrees Fahrenheit and letting the cool slowly over a period of weeks. As it cools, crystals bloom inside the new slab. 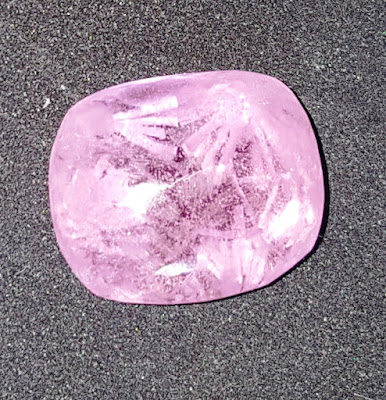 This pink cabochon is made of the same basic material and as you can see the spikes are thicker and there is almost microscopic sparkling dots adding a completely different look to the finished cab.

I'm going to give him a plug because I love this material so much and so will you.  Contact him at
Bridewell Stone Studios, https://www.facebook.com/BridewellArt/
to see what he has available now.

Slag glass is a fascinating mix of manufactured (the glass) and the artistic patterns that are formed when it is dumped into a heap. It's not so much  a cold-blooded product like goldstone (see below), but a happy combination of the way the different colors are disposed of into a glass slag heap. 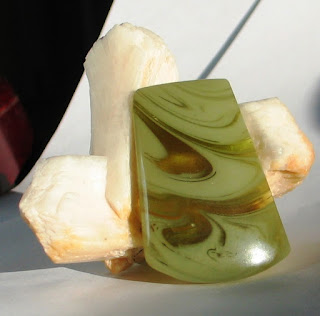 For me, this comes right under Roy's crystals because while it is pretty and shiny, it lacks the gemmy look of the other.

Slag glass is excess material from the glass making process. It is often cast aside as undesirable--unless of course, you love committing lapidary on it.

I found this yummy piece as a random slab at a rock show. I loved the movement it contained and decided to take it home and let it tell its story. You can clearly see some aspects of the rock supporting the cabochon through the transparent sections.


ALL THE STARS IN THE SKY - GOLDSTONE

Goldstone is often found at rockshows and in jewelry. I've been told at various times that it was mined in Russia or South America and that the flecks were real gold.

Great story; but not true. If a seller tells you this, assume anything else they tell you about their merchandise is equally untrue.

However, it can also be truthfully called adventurine glass, stellaria, or monkstone.

It comes in two steps below Ray's crystals because of its uniform consistency. Ever notice the difference between a natural granite slab countertop and a manufactured one?  The natural one will generally have inconsistencies that pull your eye around the surface. The uniformity of the manufactured ones is lovely to look at, but without the inherent charm of the natural.

Goldstone is a glass product made in a low-oxygen environment. According to Wikipedia, "The most common form of goldstone is reddish-brown, containing tiny crystals of metallic copper that require special conditions to form properly. The initial batch is melted together from silica, copper oxide, and other metal oxides to chemically reduce the copper ions to elemental copper. The vat is then sealed off from the air and maintained within a narrow temperature range, keeping the glass hot enough to remain liquid while allowing metallic crystals to precipitate from solution without melting or oxidizing.

"After a suitable crystallization period, the entire batch is cooled to a single solid mass, which is then broken out of the vat for selection and shaping. The final appearance of each batch is highly variable and heterogenous. The best material is near the center or "heart" of the mass, ideally with large, bright metal crystals suspended in a semitransparent glass matrix." 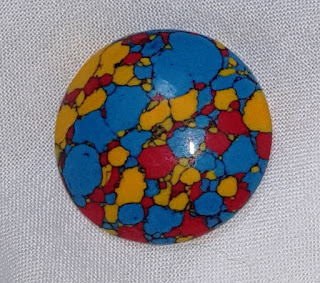 As you know, most Fordite is a single color with swirls showing the way the material settled and hardened. Sometimes it's called Motor Agate because it is made by layers and layers of automobile paint that was sprayed at cars and has hardened to a product that can be cut and polished into cabochons.

This comes in last of the four lapidary materials covered in this blog post. It just doesn't have the pizazz of the others and isn't as likely to talk to me about what it wants to be as the others.

When I was in Quaratzsite  last year, I saw one block of Fordite that really caught my eye.  It consisted of the primary colors of red, blue and yellow. It was so cheerful that I just couldn't resist.

It's fun to work with and makes beautiful slabs and cabs (doesn't this one look almost like a button for a child's outfit?). But if you get some, be careful not to work it with too rough a grit.  If I used anything rougher than a 220 grit on my wheel, the little bits of color had a tendency to fly off.

I'd love to hear about any unnatural materials you use for cabbing. Drop me a note!

Until next time,
Your Lapidary Whisperer