YOU DECIDE - BEST IN BLUE, LARIMAR OR QUARTZ?

There's something about a sky-blue stone that makes me catch my breath. The color is so cool and refreshing and, especially when the color has lighter markings through it, fascinating, like it wants me to tell its story.

One mineral I've wanted to work with--a lot--is larimar. This sunny day stone with remarkable white markings always looks like it's got secrets it wants me to share. One hold-back for me has been the cost. At the shows I've been to where it is being sold, it's been about $0.65 a gram and up. If I wanted enough to make several small cabs, I was talking a lot more than lunch money.

So, up until now, I've looked a lot, but I haven't taken any home. Notice I said "until now".

It all started when I was at  Quartzsite last winter. I found a vendor who had some blue slabs that caught my eye. Could they be larimar? If so, the price was so low I was going to get a whole bunch of the stuff!

The vendor said I wasn't the first to ask. However, while his slabs look a lot like larimar, they're actually blue quartz from China. Here's one of the slabs I purchased from him for $17.00. 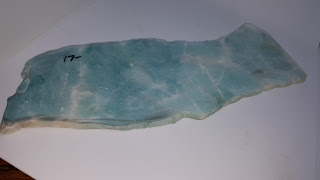 IS IT LARIMAR, OR IS IT QUARTZ?

Then in the interests of full investigation, (It sounds better than I finally found an excuse to buy some larimar 😏), I looked online until I found larimar available in small slabs and purchased a bit. Then to test whether or not they actually looked as much alike as I'd thought they would, I made a cab of each stone. Can you tell which is which? I'll tell you at the bottom of the blog. 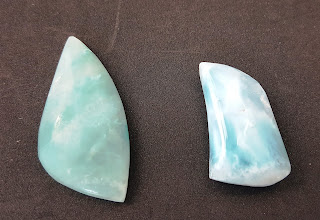 So, they really look a lot alike, but there are several significant differences.

2. Availability When I found this, it was the first and only time I've seen this particular blue quartz. I've looked online and found a lot of blue quartz listed as healing stones, but none of it had this particular color with the white included. However, it does not have the distinctive "blossom" markings often found in larimar. On the other hand, larimar is pretty widely available, if costly. I purchased mine from ncestones on eBay, but there are many other vendors out there selling all qualities of this mineral.

3. Price Okay, this was a math problem. Everything had to be converted to one scale in order to compare prices realistically. I decided to go with grams, since that's something we frequently see as a weight measurement at shows.

At shows, the price for larimar I've seen most often is $0.65/gram.

The larimar I purchase on line was sold by the carat weighing out at 274.5/ct. I converted it to grams and the price was $0.44/gram.

As you can see, there can be an enormous difference among the prices you can pay to make a pretty blue cab. There is a significant price cut to purchase online, but you have to count on the pictures to know what you have (if possible, see both sides because if the "b" side is important to you, you want to be sure it looks great).  But, the shortcoming of purchasing online is that you can't see it and touch it before you purchase.

While the blue quartz does make some lovely cabs, the larimar wins my vote for rock to cab. Since it is much harder than the quartz, it takes a much, much better shine!

I'd love to hear from you. Let me know about the rocks you're working on Just click on the "Comments" section below!

See  you next time, Your Lapidary Whisperer,