CABS I FOUND HIDING INSIDE THUNDEREGGS

I used to think that thundereggs were, to be honest, boring. The first ones I found had milky-colored stones that were often too small, misshapen, or simply not interested in telling me a story. 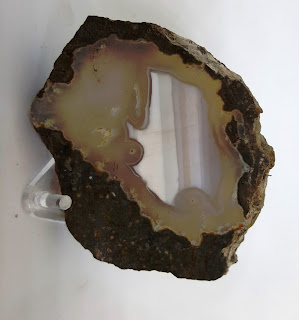 Then, I started getting lucky once in a while. The first lucky thundereggs were table agate stripes of quartz layers in different shades like this one. Now, in and of themselves, these stripes aren't all that fascinating, but the thunderegg assured me that I'd find a story if I just kept looking.

The one thing I was sure of was that I did not want to include any of the non-quartz material in my cab, so I sliced this and decided to go with a free-form shape and see what happened.

GUESS WHAT I FOUND! 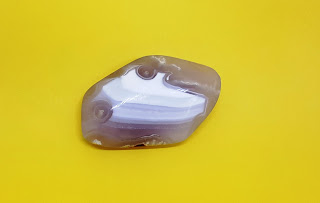 I found a little race car! In the picture you can see the rear wheel and the head of the driver in the cockpit. The circles are cross views of tube agates that also grew with the table agate inside the thunderegg, but were not visible until I had ground the agate into the curved cab shape. I had designed the free-form shape of this cab before I started grinding, so I didn't know about the car yet, but I love the way the shape makes the car look like it's moving.

MAKING THE MOSS OF IT 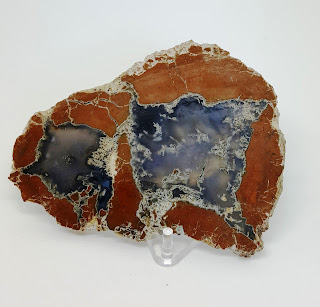 This slab from a double thunderegg had a lot of moss running through it. It turned out to be mixed blessing. On one hand, the moss itself is lovely, however, on the other hand, the quartz is a smokey gray color.

I was ambivalent about working it until I saw it back-lit. It was amazing! The smokey color faded out to yellow and the fanciful moss became distinct with crisp edges and gave the impression of floating.

It's a nice cab for my collection, but I doubt I'll ever mount it for jewelry because it's much less impressive without the back light. 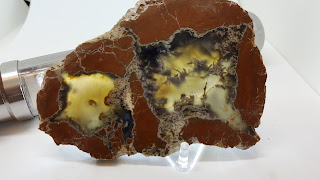 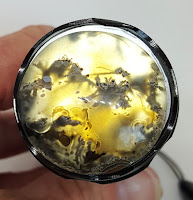 BREAKING MY OWN RULES

Earlier, I mentioned that I I don't like to include the non-quartzy material when I make cabs from thundereggs.

Except for this one.

In working with the exterior material, I've had problems because it tends to be somewhat soft, happy to have small chunks fall off, and refuse to take a polish or even a bit of a luster. For this free-form, I would have lost the full shaping of the material, and I was afraid I'd also lose the golden color. When I made this shape, I could feel the gold colored material and it was slightly rougher than the agate center, so I didn't want to get in close and risk losing the red and gold embellishments. 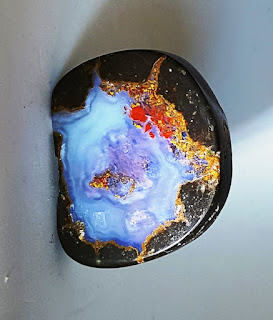 For those of you noticing the cab is on its side, well, no matter what angle I took the photo from, and no matter how many times I edited it before bringing it into the blog, it kept insisting on returning to this view. Since my rocks tend to talk to me, I finally decided it was saying it liked this view best. So it is what it is.

I also love the way the interior circle-ish shapes give the impression that it is a blue whirlpool and it is breaking off parts of the gold edge and swirling them away.

Have you ever found a really incredible cab inside a thunderegg? If so, send me a picture and maybe I can use it in another blog post.Click here to reach me!

Donna Albrecht
Posted by Donna at 12:00 AM