The apple-green color caught my eye and the brown threads going through it impressed me.  It was being sold by the gram, which normally is a no-no for me, but I couldn't resist.  The seller had a few sample cabs of the material and they were story-worthy and very shiny!  So he got to play with my credit card for a minute and I got to take home a chunk of the talkative Chrysoprase!

It can often be found at serpentine deposits.

Depending on where it is mined, it can also be called  Australian Jade, Chrysophrase or Jadine.

While the color in this mineral is from nickel, there are other green rocks and minerals that get their green from copper, iron, chromium, or manganese. Sometimes, chrysoprase is confused with Chrome Chalcedony which is colored by chromium.

Back to chrysoprase.  The best place for me to find it is at rock shows 😏  It comes to them from mines in California, Brazil Indonesia, Western Australia, and north-central Europe.

Working the material was a dream.  A good dream (yes, we all know rocks that have turned out to be nightmares - I'm talking to you apatite). To me, this looks like a powerful need plants have to grow up from their roots to freedom. 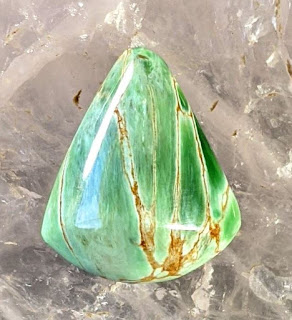 At between six and seven on the Mohs scale, chrysoprase is a firm rock, and I start it on the 80 grit wheel to do the rough shaping so it doesn't take forever. The next two wheels get the shape smooth and it's ready to polish.  Since it is a fairly hard rock, I take my time on the three polish wheels to be sure I get the best result.  On my Genie, I have a 50,000 wheel that gives a glass-like polish. The cabochon above actually is a combination of gemmy (the dark green which doesn't show it here, but is translucent) and not-so-gemmy chrysoprase.


As you can see, the material I purchased (at the top), It has random brown lines through it, making me wonder what stories were lurking behind them. I forgot to ask the vendor where it came from, but seeing this picture of the mineral from the Yerilla Chrysoprase Mine in Western Australia, I suspect it may have come from there


All this has gotten me thinking about other gemstones that may not be all that gemmy.  Check in next month to see what I learned about "gemstones" that are better on the grinding machine than the faceting machine.