One of the fun things about doing this blog is that I often start it thinking the subject will be simple and I'll get through it in no time.  So . . .

Garnets, I thought! I'll do a blog post on garnets! I love them, I've seen them in a few different colors, and I've heard words like Grossular thrown around a lot. Should be a piece of cake, right? You already know the answer; it's not.

First, garnet is more of a category than a specific gemstone. For identification, these six minerals are considered garnets:  pyrope, almandine, spessartine, grossular, uvariote and andradite.   All of the species have similar crystal forms as well as physical properties, but they contain different chemicals.


MORE THAN A PRETTY FACE

Garnets are not only gemstones, they've also been used as abrasives since the Bronze Age. Really!  If you go by any place that sells sand paper or other abrasives, you'll see that garnet is used on products in a wide range of grits. Somehow, it seems sad to think gemstone and see sandpaper, but like other gemstones, garnet occurs in a range of qualities and not all are gemmy.

Sometimes red garnets and other red gemstones, like ruby spinel, are collectively called carbuncles. Early Latin defined carbuncle as a burning coal. In medieval times a carbuncle was a stone with magical properties. It could create light in a dark place. According to Wikipedia, In the French romance of c.1150, a fictionalized Charlemagne finds that his bedchamber in Emperor Hugo's palace has such lighting. However, for people today, a carbuncle is more likely to be know as a cluster of boils in flesh cause by a staph infection. (No, I'm not putting a picture of that kind of carbuncle in my blog!)

In my (limited) experience, any time a cluster of small garnet crystals is found together, it is referred to as grossular. Yet, as you undoubtedly noticed above, it is a specific kind of garnet. It comes in most colors except blue, but is most often green. In fact, it's name is a nod to the gooseberry's in Siberia which are the same color as the grossular garnets that are mined there.Yet, because it can come in many colors, my original understanding of the term may be more accurate than I thought.  Here's a golden specimen of grossular garnets that was collected by Dr. John Hunter in the 18th century. 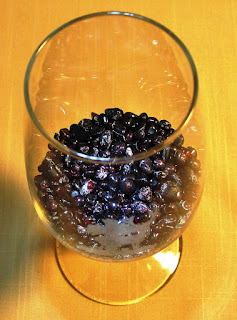 For lapidary purposes, it helps to know that garnets can range from 6.5 to 7.5 on the Mohs scale.  Because of this, it can be cabbed and faceted. In some circumstances where they are not gemmy enough for jewelry, you can tumble them like I did here!

This is a bunch of small grape garnets tumbled to help the color come through and put in a wine glass. Now, they are part of one of my rock meal cases as "grape wine".

I am one of those who really enjoy garnet jewelry, especially the reds and red/browns.  There's something both earthy and full of life about them. 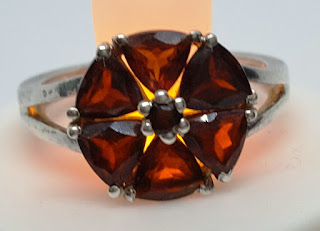 This ring goes everywhere and always makes me smile.The warmth of the golden/red color is seriously classy without being too blingy.

And, of course, as a rockhound, I've managed to acquire a piece of rough rock that contains garnets.  It's pretty cool the way there are pockets all through the rock and the perfect garnets are nestled inside. 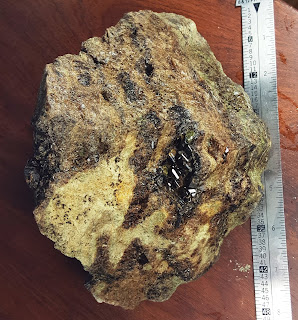 So, what is your favorite garnet and why? Drop me a note with a picture!

Take time while it's still show season to go out and find some yourself (maybe not as much fun as searching them out in nature, but easier and cleaner!).

To get the latest scheduling for rock shows around the country, go to Rock & Gem's website Here