MY ADVENTURES WITH MILLEFIORI GLASS--MAYBE

I've always admired the Millefiori Glass when I've seen it in beads and pendants. The bright colors and patterns that remind me of the late 1960's (Flower Power anyone?) and were pretty tempting. I also love kaleidoscopes, and the Millefiori glass I'd seen looked somewhat like it was at the end of my kaleidoscope.  I'd tried a few times to get my hands on some, but until my trip to Arizona this month, I hadn't had any luck.

Then I saw it in a tub in Quartzsite!

Bricks of the stuff! The reds, the blues, and the green were spectacular. The tiny flowers would bring a smile to Grinch's face. So I bought some and brought it home.

I love this stuff so much I have to share it. If you want a FREE SLAB, see below!

GLASS BRICKS--THE ANSWER TO THE PROBLEM OF GETTING DIFFERENT ANGLES.

This red brick is about six inches square and about 1.5 inches thick (see the end cut above). There is some sort of silvery material around the brick, probably glass dust. Notice how the parallel lines on the side gave me a lot of new possibilities! 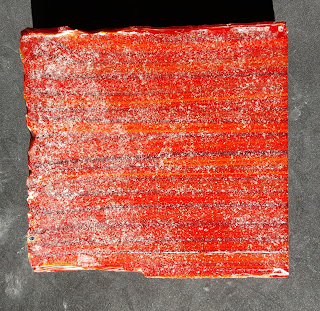 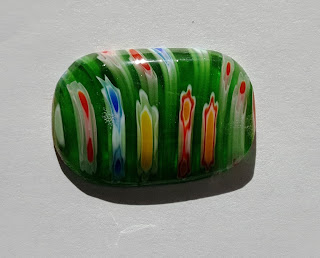 The reason I wanted bricks instead of slabs was because I was fascinated with the possibilities of cutting and cabbing it that weren't just a strait cut parallel to the blossoms. I wanted to do cabs, and I wanted to cab the glass on angles showing off the material inside.

This is a piece I cabbed from the green block I purchased. The colors are bright and it almost looks like there's some weird choir singing through the glass.

In my haste to acquire these beautiful bricks at such a good price, I didn't ask too many questions. I'm sure none of you have ever done that . . . The good price? Well, the show was a few days from closing, so I figured I got lucky. Maybe.

After I got home, I gave myself some time to take a better look at the bricks. They were still beautiful, but, darn if there weren't some flaws. But even world famous Millefiori Glass from Murano would occasionally have a bum batch they'd sell off cheap, right?

Because of the history and craftsmanship of the Millefiori Glass made in Murano, Italy. It is the gold standard. Other places may make a similar looking product and even use the same techniques, but they aren't the same. Many are undoubtedly lovely, but it's similar is using the word "Champagne" to describe a bubbly wine. While there are many wineries that produce extraordinary bubbly all around the world, only wines made from grapes grown in the Champagne area of France and grown and produced following specific guidelines are actually Champagne.


According to Wikipedia, "Millefiori is a glasswork technique which produces distinctive decorative patterns on glassware. The term millefiori is a combination of the Italian words "mille" (thousand) and "fiori" (flowers). Apsley Pellatt in his book Curiosities of Glass Making was the first to use the term "millefiori", which appeared in the Oxford English Dictionary in 1849. The beads were before then called mosaic beads."

My next step was to send some pictures of what I had purchased to Client Services at Glass Of Venice, a distributor of Millefiori Glass art. Julia wrote back quickly, "In our opinion this is not authentic Murano Glass. Similar slabs made in China can be purchased on Alibaba for a low price of $16 per kilogram, see this listing as an example: https://m.alibaba.com/product/60475870290/Wholesale-colored-millefiori-glass-brick-for.html


Murano masters typically do not sell Millefiori Glass in bricks, Italian Millefiori Glass is available either in rods or in the finished form. Murano Millefiori is entirely handmade using the ancient method, which is very labor intensive and results in high prices."


I checked the website and you have to purchase a whole lot of the stuff to get that price. Also, checking around, I discovered that the Murano glass is generally sold in rods or bits of rods, to be assembled, fired, and finished by the glass artist.

On their web site, Glass of Venice, they share this history of the beautiful glass.

"In the sixteenth century some of the Murano (Italy) glass artisans started attempts to imitate the beautiful ancient glassware created by Romans. They were successful in doing that, but as with many other glassmaking techniques, the secret they uncovered had subsequently been lost again until the interest in these Roman pieces sparked anew in the second half of the nineteenth century.


At that time when archeological discoveries became more frequent and many beautiful decorative items were unearthed, Murano glass artists again became fascinated with glassware from classic antiquity created by the ancient Romans and exhibited in the famous Murano Glass Museum.


Some of the beautiful objects that came to us from those times include glass vases, bowls, urns, and plates with flower or abstract patterns spread around the inside and outside surfaces of the objects.


Venetian glass artisans understood conceptually that these items were created using glass rods shaped in various patterns and then cut up and fused together. For more information on the history and creation of Millefiori Glass, check out Click Here

WAS THIS A GOOD PURCHASE? 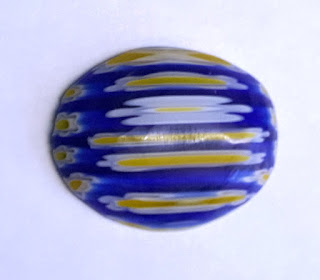 You might think I'd be disappointed to know that the millefiori-style glass I purchased wasn't the real deal, but you'd be mistaken.

I LOVE this stuff!


I think the parts with flaws, make the viewer wonder 'what happened there?' which is another way of creating a story. The parts that don't have flaws? That's a story of its own.  I'm going to keep working with it from time to time and see what other stories it has to share. 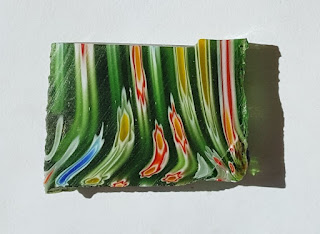 As you know, this Lapidary Whisperer, has rocks that tell her their stories which I try to incorporate into whatever I make of them. So, I'll send this slab to the reader in the U.S. who gives me the name or story for this stone I like best. If you work it, I'd love to run a picture of what you made on a blog in the future. If you just like the slab, no problem. The story doesn't need to be more than a sentence or so, just let me know what you see in it.

Send your entry to me directly at Donna@LapidaryWhisperer.com

Tell me a story!