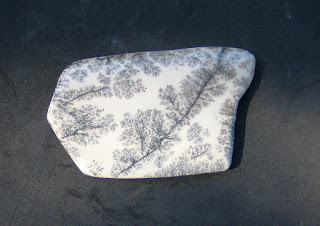 I've always loved dendrites in my rocks. Dendrites are markings in stones that look like ferns or trees or other plants--if you catch them along their long direction. However, when you cross-cut them, you get a bunch of dots like the two different angles of the same piece of dendritic opal below. 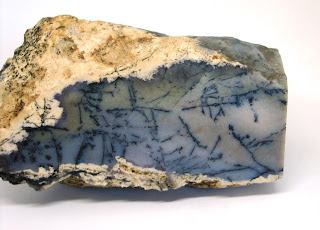 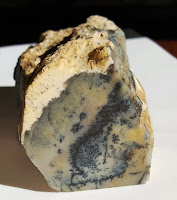 In today's blog, I'm taking a strict interpretation of dendrites. Some people like to include plume agates with dendritic agates,but aside from the fact that they look very different to me, Roger Pabian, co-author of "Agates: Treasures of the Earth" has clarified the difference in that he states that Dendrites form inside existing agates and Plumes form first and then are surrounded by agate. 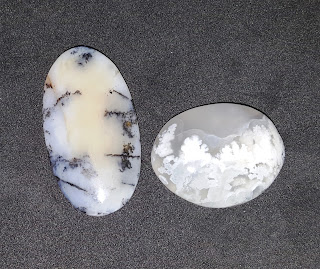 It is further complicated by the fact that not all rocks with dendrites are agates. However, they usually are made of chalcedony, a term used to describe a group of microcrystalline silica-based minerals that include quartz, jasper, and onyx. They are great for lapidary work all coming in at 6.5 to 7 on the Mohs scale of hardness. Another mineral known for dramatic dendrites is Rhyolite which is also a silica-based mineral. It's not a chalcedony because Rhyolite crystals are much larger than the microscopic ones that define chalcedony.  Some of my favorite dendritic rhyolite is found in the Sonora area of Mexico (and rock shows!)

And then there's dendritic sandstone. Sandstone doesn't have a place on the Mohs scale because it can be so soft you can rub it off with your finger up to something very hard that can be used in construction.

From a mineral standpoint, dendrites consist of iron or manganese from nearby rocks that seep into cracks in the chalcedony and crystallize as they harden, creating the fern or tree patterns that make them so popular. In my readings about them, I was disappointed to see that they were nearly always described as black or brown in color, especially since I have two onyx rocks on my desk right now; one has dark blue dendrites and the other has dendrites the color of burgundy wine. It turns out that manganese oxide comes in a rainbow of colors including pink, violet, green and others. 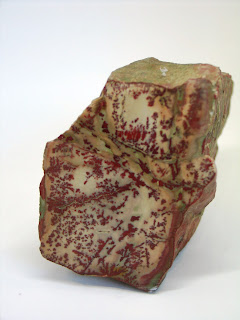 NOT EXACTLY ONE OF THE ABOVE 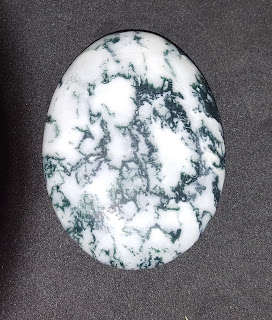 Whenever people try to place walls around the natural processes, there are usually exceptions. This is a picture of a moss agate. Like other dendrites, it forms in the cracks of established chalcedony rocks. The difference is the mineral inclusion is green hornblende. It's as delightful to work as any of the others, and the startling green color is always an eye-catcher!

For all my readers in the USA, have a happy and blessed Thanksgiving.  As others begin to prepare for seasonal holidays, I wish you all the best.

Right now, I'm working on a blog post about how minerals get inside geodes--or when you see a channel between the interior of the geode and it's outside is the material expanding and flowing out, or is it the minerals lining the geode flowing in?