DO YOUR CABOCHON STONES CONTAIN METAL?

You know how you sometimes see a stone or cabochon and say it has metal in it?  Maybe yes . . . maybe not exactly.

Here's the skinny on how to tell the difference.

METAL- (Naturally occurring) consists of a single atomic element, like iron, copper, etc.
MINERAL - a combination of several elements and is generally crystalline, some of which can be processed into metal.

Right now, you're thinking to yourself, "Of course, I always go to to the atomic level of identifying the inclusions in my rocks." Relax. If you identify a streak of hematite as iron, you're right for your lapidary purposes. We're not evaluating the metal/mineral content to ascertain whether it can be profitably mined, we're helping those who love our work understand what they're seeing.

For example, check out this nifty copper cabochon with an epidote matrix (according to the vendor I purchased it from) has the copper peeking through it. 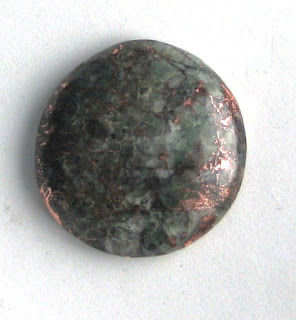 I've heard that this kind of specimens can sometimes have quartz in it, which would have lightened its look a bit, but all in all, I like the blue-green

However, this Tiger Iron cab? Not exactly. 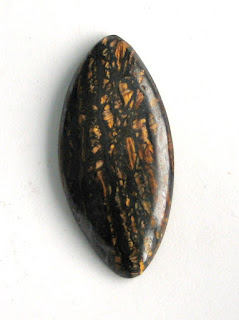 The first time I saw a slab of Tiger Iron, I thought it was a very poor quality of Tiger Eye. But I was wrong.

Tiger Iron is a separate kind of mineral that combines Tiger Eye and Hematite in random patterns. Hematite itself, is a form of Iron Oxide which is where the "Iron" in Tiger Iron comes from. Depending on the amount of Hematite vs Tiger Eye, it can be very attractive. However, I prefer a lot more Tiger Eye than Hematite, so this isn't a favorite among my cabochons. The dark overwhelms the chatoyance. I see this from time to time at rock shows, but if I'm doing the buying, I'll get straight Tiger Eye any day. 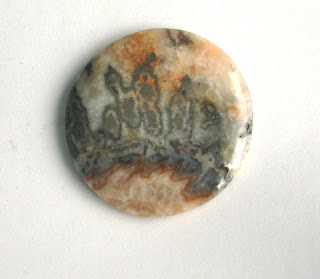 I admit I love this cab!  It's quartz with pyrite  embedded in it. Because of the orange in the quartz and the shapes of the markings, it looks a lot to me like a magical fire. I wasn't able to catch the flash from the pyrite in a picture, but it's very impressive in person.

The Pyrite is a mineral (Iron Sulfide) and it's also known as "Fool's Gold". In some settings, like this, it actually looks more like the Iron it contains than gold, but if you've seen pyrite crystals, you understand where the name originated. 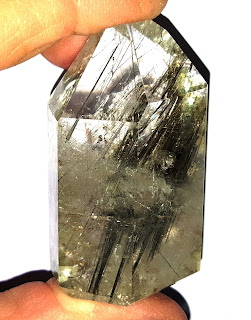 When I first started admiring Rutilated Quartz, I thought that the different colors of the thin lines meant that they were different materials. Not so. According to Mindat.org, Rutile (TiO2) comes in Blood red, brownish yellow, brown-red, yellow, greyish-black, black, brown, bluish or violet.

Oxides are actually found in many stones. In rutilated quartz, the rutiles  can be made of tin oxide.   That's the same stuff in the white paste lifeguards at the beach smear on their noses to prevent sunburn. More importantly, in its dry form, it makes a wonderful lapidary polish.


Do you have any inclusions that you want to identify as either metal or mineral? Send me the information and a picture and I'll see what I can do to help you identify it.

In case you missed it, the cabochon from the last blog post was identified by  Burton Rondo as Bacon Opal with Hyalite, so he won!  A cab of the material is on its way to him!