The Eyes Have it - Chatoyant minerals


As a lapidarian, my favorite chatoyant stones to work with are pietersite and tiger eye. They both provide a lot of flash, especially in cabochon form and they're not as picky about angles as I've found laboradite to be. They also both take a nice polish which adds to the flash of the chatoyance.

One of the reasons I love working with pietersite is the way the waves of parallel fibers fold back and forth over themselves, creating unique patterns like on this blue specimen. The material is pricey, but I love to treat myself to a piece now and then. Wouldn't you? 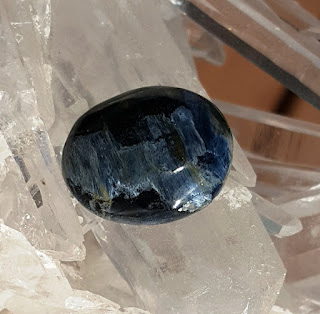 A BEAUTIFUL WORD FROM THE FRENCH!

Chatoyance (Sha-toy-ance) is a delightful word that rolls off the tongue. It comes from the French word chatoyer, meaning shine or luster. It's probably no accident that the first four letters "chat" mean cat in French and the cats eye effect in minerals is called chatoyant. You'll hear a lot of rockhounds and lapidary artists refer to it as the 'flash' in the stone, because it only shows that remarkable shine when the light hits it just right 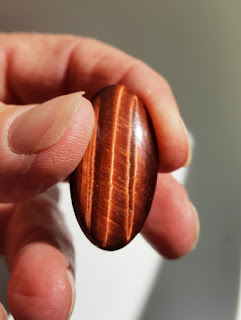 This beautiful reddish tiger eye is nothing to look at  in normal light, but put it in the sun and you get flashes of light called chatoyance. Tiger Eye is one of many stones that share this characteristic.  Chatoyance occurs when fibers in a stone line up parallel to each other, at least in a segment. The shine/flash is always perpendicular to the fibers. 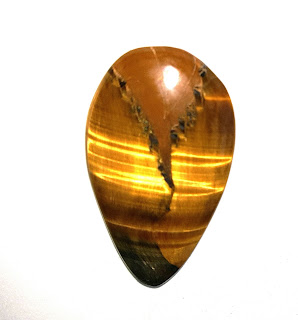 This tiger eye that was in a different blog posting. I love the way it demonstrates how bright the flashes can be.

IT'S ALL ABOUT THE LIGHT! 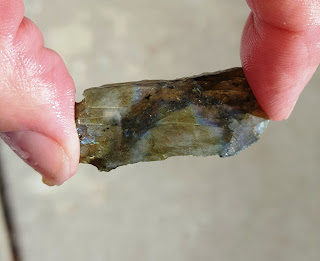 This not very attractive stone is a slab of labradorite I photographed in indirect light. You can see there are some different colors, but it's not anything to get excited about.

However, you can see the same stone below photographed in sunlight, and the chatoyance creates flashes of dramatic colors. The secret to working with it is to be sure to get that flash on the face of the cabochon. I see it used a lot by wire work artists where the shine of the silver adds to the effect. 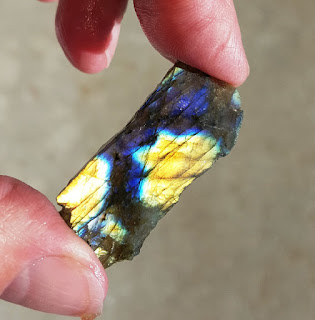 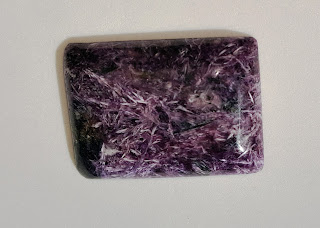 Charoite is listed as a chatoyant mineral, and I've seen some that is, but this cab of mine really isn't. Part of the problem is that not all charoite has bands of parallel fibers. Since the flash happens when the fibers are not parallel to the base and these fibers are completely disorganized, it doesn't flash at all for me.

At the same time, it is still a gorgeous purple cab and the white fibers add a lot of interest.

Have you ever made cabs with chatoyant minerals?  I'd love to see some pictures of you work!

Until next time,
Your Lapidary Whisperer,