Since I love to commit lapidary, finding just the right stones to work with is a critical first step. Here on the west coast and for many lapidarians around the world, January and February are the months to make our pilgrimages to Arizona for the Quartzsite and Tucson shows.
This year, I’m spending my time and money in Quartzsite, looking for some large and loud rocks that want to tell me they want to come home with me.
I’ll probably blog about Quartzsite later, but here’s my impression of my first visit to Tucson last year. Enjoy! 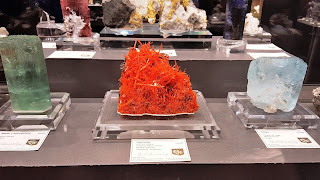 Tucson has always been the “Big Show” to me as a lapidarian and all-around rock lover, and I finally got to go last February! It was everything I’d hoped, and on the other hand, a little less. That sounds weird, but my vision as a lapidarian was end-to-end slices and rough. My unofficial guess was that over half the vendors were dealing in jewelry, or unexpected items like wood carvings, metal sculptures, and even clothing and textiles that had nothing to do with rocks.
However, the other parts were absolute heaven for this Lapidary Whisperer. I only had Friday afternoon, and all Saturday and Sunday of the last weekend. It’s not just a one-place show; it’s actually dozens of shows; some run the whole time, others only for a few days or so. I had limited time, so I focused my attention on only a few of them.

ONE SHOW, MANY SITES

My hands-down favorite was the show was the Kino Gem & Mineral show at the Kino Sports Complex. It appeared to me to have the most rough of any of the sites I visited. I was able to purchase some Apple Valley Agate, some richly blue Viviante along with some Rock Candy Geodes (geodes are a weakness of mine) and a nice chunk of Pinolith with a lovely pattern.

On the courtesy shuttle back to my car, the driver said that because of the success of the rough rock vendors, they were looking at expanding the space of their show and adding a lot more of them.
The show at the Howard Johnson Gem and Mineral Show had a very different vibe. If you’ve ever worked with Rutilated Quartz, you know it can be tricky to work with, but pays off with incredible cabs. One of the first displays I saw at this show was a kids-size plastic swimming pool loaded with the stuff. I barely pried myself away because I’m always on the lookout for this, and rarely find it at a price I can afford. From my standpoint his prices for people who wanted less than kilos of random rock from the pile (no choosing), made his material unappealing for me, but I had hope I’d find more. I held onto that hope until I turned the corner and saw a whole lane of vendors who had pools full of Rutilated Quartz. I was delighted to choose some beautiful specimens from a friendly vendor!
I also visited the 22nd Street Show vendors and those at the JG&M Show and found both had a lot to recommend them.
Finally! I went to the big show, Tucson Gem and Mineral Society’s “Shades of Blue: Minerals of the World” at the Tucson Convention Center. This immense site is breathtaking, especially from the big glass wall above the floor where you can see nearly endless rows of vendors packing every available inch. While there was virtually nothing there for someone looking for slabs or rough, I saw some of the most fantastic jewelry, specimens and carvings ever! In addition, serious efforts were made here to get kids involved and excited about gems, minerals, and what can be done with them.
Another favorite part of this site was the display of high-end specimens that any museum would be proud to own. My favorites were the Plumbogummite (a pryomoiphite from China that looks like long puffy blue sugar candy, and the bright red Crocoite from the Red Lead Mine. 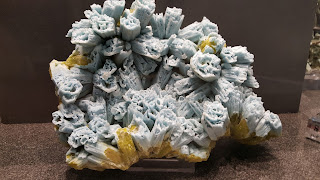 It wasn’t just a display, the items were for sale beginning at the high four figures to the high five figures and some with the POR (Price on Request) tag—always a sign for me to take pictures, because it sure isn’t coming home with me.

Going the last weekend had its ups and downs. Some vendors were more willing to cut a deal on the last two days, but not all dealers haul everything back home or overseas. One mentioned that he’d store his left-overs until next year and bring more fresh materials to add new interest, so he wasn’t interested in playing ‘Let’s Make a Deal’. There were also some dealers who began packing up before the show ended. Next time, I’m going to try to go close to the beginning and see how that’s different.
Have you been to the Tucson shows? I’d love to hear your impressions and experiences. Maybe I can use them in a future blog!
Drop me a line at Donna@LapidaryWhisperer.com
If you like what you see here, please go to the top of the right side column and subscribe. You'll get my blog automatically delivered to you every two weeks!

Yours for Lapidary Fun!
Your Lapidary Whisperer,
Donna Albrecht
Posted by Donna at 1:00 AM