PETRIFIED IN A BLUE FOREST 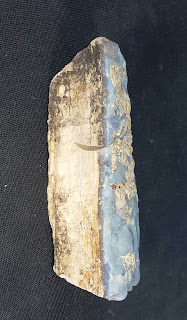 The first time I saw this incredibly blue chunk of what looks like part of a limb, I had to have it. I'd never seen anything like it before. Petrified wood with blue bark! It looks to me as if the blue chalcedony formula changed a bit over time as the material directly in contact with the wood is darker than the material on the top. It appears that it once was botryoidal but the cool bumps were worn down.

It turns out there is only one area known to have this particular material; the Blue Forest at the west end of Eden Valley, Wyoming.  Don't let the the name of the place fool you, it may have been a forest in the Eocene Era, but now it's pretty desolate now.

This image of Blue Forest petrified wood where the chalcedony filled the center, shows both gradation of color due to minute changes in the mineral content of the water when it was formed as well as a botryoidal lining in the center.

Side comment, I love to say the word botryoidal. It's somewhat lyrical. Don't know how to pronounce it, check out Daniel's example at Here

In the Blue Forest of Wyoming, about fifty million years ago, it is believed that a volcano erupted in the region, knocking the trees over. The area where they fell is swampy and algae quickly enveloped the wood, preserving the shape. Over countless years, the wood cells themselves decayed and the space was taken by agate, quartz and silica primarily, along with a variety of minerals. There can be a range of blue colors created by the inclusion of tiny amounts of manganese, iron, copper and titanium.

This cool image of botryoidal blue is courtesy of Jim Snowden at Blue Forest Petrified Wood Their site is one of the places I visited when I researched this blog post. I encourage you to visit them for information or to purchase amazing specimens.

NOT ALL BLUE WOOD IS FROM THE BLUE FOREST


In the image at the top, the wood did not shrink as it was being petrified and you can see that the wood grain was very well preserved. In some cases, the wood has shrunk creating voids that are filled with the blue chalcedony, which leads to . . .

At the San Francisco Mineral & Gem Society show this weekend, I saw (okay, I bought) this chunk of rock from the Blue Forest. I took the picture dry, but wet, even the wood has a blue hue. In this case, the bark is rough golden chalcedony. In this situation, when the wood petrified, it shrank, allowing flows of blue and gold chalcedony and a bit of white quartz. It reminds me of some boulder opal I got some time ago, except that while the blue is lovely, it's no opal!

I've made a number of cabochons from petrified wood. They chatted with me and helped me create some amazing cabs.  If you're hoping to see an image of a Blue Forest cab here, it may be a while. So far I can't bring myself to slab my new acquisition even though it is thick enough, and I'm afraid if I try to slab the quarter-round specimen at the top, the blue will detach.  Darn.

Have you ever worked with this material? I'd love to see your photos!

Until next time,
Your Lapidary Whisperer,
Donna